… in 1968, during the Vietnam War, the My Lai Massacre — in which somewhere between 275 and 500 Vietnamese villagers, nearly all of them unarmed children, women and elderly — was carried out by United States troops under the command of Lt. William Calley Jr. Forty years on, there have been some commemorative ceremonies at My Lai.

Ron Haberle, a military photographer who accompanied the troops, took this photograph on the day. 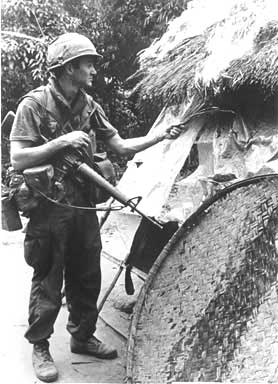 The strange thing about this image is how calm and relaxed the soldier appears to be as he torches someone’s home.

The great journalist Seymour Hersh eventually broke the story on November 12, 1969, after which the US Army launched an investigation, which was conducted by General William Peers.

Here’s an excerpt from the Peers report:

The fire team of the lst Squad, which had searched through the southeastern portion of the hamlet, arrived at the ditch at about 0900 hours and brought with it approximately 10 additional villagers. The villagers were herded into the ditch with the larger group of 60-70. (There has been testimony from Vietnamese witnesses that an additional number of villagers, pos sibly 50 or more, were either brought to the ditch from surrounding subhamlets or sought refuge in the ditch from the C Company action. Testimony from US personnel to substantiate the Vietnamese statements has not been developed by this Inquiry.) At approximately 0900-0915 hours, Vietnamese personnel who had been herded into the ditch were shot down by menters of the lst Platoon.

Inside the subhamlet of Binh Tay, the 2d Platoon continued the pattern of burning, killings, and rapes which it had followed in My Lai (4). Besides scattered killing which took place inside the subhamlet, a group of Vietnamese women and children (approximately 10-20) were rounded up, brought to the southern end of Binh Tay, and made to squat in a circle. Several 40mm rounds from an M-79 grenade launcher were fired into their midst, killing several and wounding many. The wounded were subsequently killed by small arms fire from members of the platoon. Witnesses from the platoon have testified to observing at least one gang-rape of a young Vietnamese girl, an act of sodomy, and several other rape/killings while inside Binh Tay.

On the LZ, the 3d Squad of the 3d Platoon had returned at approximately 0845 hours from its movement to the south. LT LaCross left the squad and moved to the northwest corner of the hamlet where he conferred with CPT Medina for a short while. CPT Medina told him to have his platoon begin moving through the village for the mop-up operation. LT LaCross followed behind SGT (now Mr.) Smail’s lst Squad on the left (north) flank (see sketch 6-11). SGT Grimes’ 3d Squad moved on the southern flank. The platoon, accompanied by SFC Maroney’s mortar squad, entered the western edge of the hamlet between 0845-0900 hours. CPT Medina and his command group followed behind the platoon.

After CPT Medina and the command group had moved into the hamlet for a short distance (see sketch 6-12), an old Vietnamese man with two children was apprehended and brought to their location. He was interrogated by SGT Phu, CPT Medina’s Vietnamese interpreter (see exhibits P-66 and 67). The old mm informed Medina that 30-40 VC had been in My Lai (4) the previous, evening but had departed the hamlet that morning prior to the combat assault. (This information was reported and recorded on the llth Brigade Journal. The command group then moved farther into the village toward the east and southeast.

Forward of the command group, the 3d Platoon went about the destruction of crops-and the burning of houses in a thorough systematic manner (see exhibits P-15, 35, 16, 33, 56, and 14). Throughout the hamlet, members of the platoon and the two PIO men who accompanied them observed the bodies of Vietnamese killed earlier during the lst and 2nd Platoons’ advance (see exhibits P-34, 37, and 32). Members of the 3d Platoon slaughtered most of the remaining livestock, and in at least one instance participated in the killing of about five or six seriously wounded Vietnamese to “put them out of their misery” since “they did not give them medical aid.”

On 17 March 1970, the United States Army charged 14 officers, including Major General Samuel W. Koster, the Americal Division’s commanding officer, with suppressing information related to the incident. Most of those charges were later dropped. Brigade commander Henderson was the only officer who stood trial on charges relating to the cover-up; he was acquitted on December 17, 1971.

After a 10-month-long trial, in which he claimed that he was following orders from his commanding officer, Captain Medina, Calley was convicted, on September 10, 1971, of premeditated murder for ordering the shootings. He was initially sentenced to life in prison. Two days later, however, President Nixon made the controversial decision to have Calley released from prison, pending appeal of his sentence. Calley’s sentence was later adjusted, so that he would eventually serve four and one-half months in a military prison at Fort Leavenworth, Kansas, during which time he was allowed routine and unrestricted visits by his girlfriend.

In a separate trial, Captain Medina denied giving the orders that led to the massacre, and was acquitted of all charges, effectively negating the prosecution’s theory of “command responsibility”, now referred to as the “Medina standard”. Several months after his acquittal, however, Medina admitted that he had suppressed evidence and had lied to Colonel Henderson about the number of civilian deaths.

Most of the enlisted men who were involved in the events at My Lai had already left military service, and were thus legally exempt from prosecution. In the end, of the 26 men initially charged, Calley’s was the only conviction.