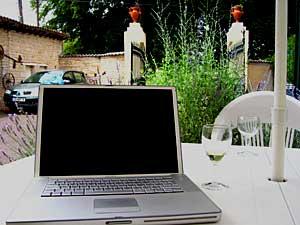 Greetings from a parallel universe. I refer, of course, to rural France, to which the Naughtons have temporarily decamped. I’m writing this sitting in front of the house we are renting from friends, after a modest lunch of baguettes, tomato and brie washed down with chilled white wine.

This is the view through our front gate. 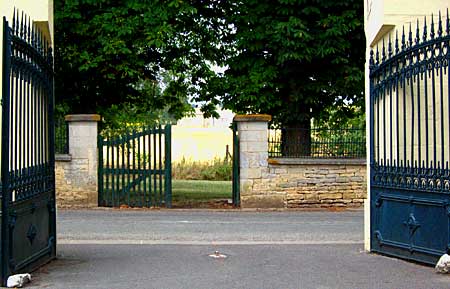 The second pair of gates, over the road, leads into the garden that goes with the house. The only sounds are those of birds and, somewhere in the distance, the crowing of a cockerel (or should that be a coq?) Behind the house, the kids are swimming in the pool, or playing ping-pong, or feeding the pet sheep which come with the place. It’s unbelievably peaceful, and quite, quite beautiful. But it also has wireless broadband, via a satellite link, so the Middle Ages it ain’t.

Someone said once that the English middle classes regard France as one giant delicatessen. Well, I’m not English, so that lets me off the hook. But I love rural France, and the way the society takes food seriously. This morning we went to the market in Aulnay, and gaped — as we always do in French markets — at the quality and abundance of the fruit and vegetables on sale. Last night we ate Charente melons and drank champagne and a beautiful liqueur called Pineau which comes from a cave just down the road. 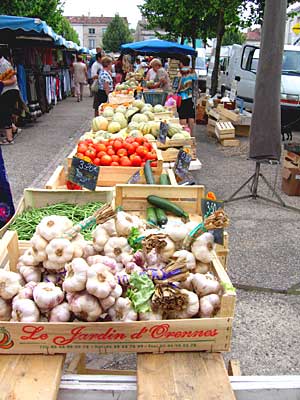 I love France because it allows one to escape the suffocating Anglo-American bubble in which Blair’s Britain now finds itself trapped. What annoys me most about that is the way its ideologues arrogantly maintain that there is no other reality — that American-style liberal capitalism is now the only possible reality.

Of course France has its problems, and the rural France that the Naughtons love is no doubt partly sustained by the European subsidies so anathema to Thatcher and Blair, but it seems to me that, as a society, the French strike a better balance between life and work. They are better tuned to the demands of nature and the weather. They are more civilised. In that sense, France genuinely resides in a parallel universe — as part of what Don ‘War Lite’ Rumsfeld sneeringly called ‘Old Europe’. Long may it continue that way.