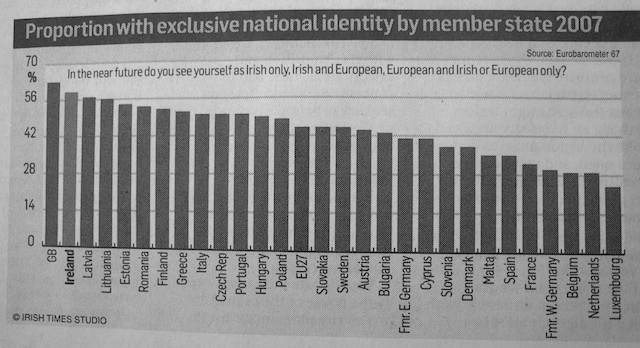 This chart (which appears in today’s Irish Times) is very illuminating — and puzzling. It’s based on the Eurobarometer survey conducted in the Spring of 2007. Interviewees were asked: “In the near future, do you see yourself as Irish only, Irish and European, European and Irish, or European only?”

Ireland is nearly at the extreme left of the chart. Only the UK has a stronger sense of non-European identity. The founding countries of the EU are all clustered on the extreme right.

What’s puzzling is that Ireland has done incredibly well out of the EU, whereas Britain probably hasn’t. Looks like my countrymen are a pretty ungrateful lot!