I’ve been using an Air for four days, so these are first impressions.

These three are almost universal:

All correct. Quentin thinks that the robustness comes from the way the edges are curved.

The Air has come in for a fair amount of geeky disdain because the design compromises needed to fit it into such a slender package are perceived as having crippled it for serious use. Thus: it can only take 2GB of RAM; the hard drive is ‘only’ 80GB; it’s slow; it doesn’t have a Firewire port; there’s no audio-in port; it doesn’t have an Ethernet port (you have to buy an optional USB-to-Ethernet adapter); it doesn’t have an optical drive; the battery can only be replaced by a dealer; etc. There’s a whiff of the ‘real men don’t eat quiche’ about all this, but really I think that these criticisms — though broadly accurate (except for the comment about speed) — are beside the point. They’re criticising the Air for not being what it was never intended to be.

Pluses: The Air is not slow — in fact it’s very responsive and nippy. It’s very quick to wake from sleep — almost instant on. The keyboard is lovely — nicer than either the MacBook Pro’s or the Macbook’s. The screen is very like that of the Macbook’s. Battery life is good. It doesn’t run hot — unlike the MacBookPro which can char-grill an average thigh in half an hour. It’s quiet. And wonderfully light. In fact, it’s a pleasure to use.

Annoyances: It comes with Leopard, about which I am still ambivalent. Well, actually, the main reason I’m irritated by it is because it won’t run PhotoShop CS. (But Aperture runs fine on it.) And Leopard does have Screen Sharing (of which more below.)

My hunch is that it has two target user-groups. The first is people who are highly mobile and use a computer mainly for email, web-browsing, word-processing, presentations and music. For these users, the diminutive heft of the Air is very attractive, and its processing power and storage are perfectly adequate. The other target category is comprised of heavy audio-visual users, programmers, editors etc. who really need a desktop machine with sophisticated i/o, big screens etc. but who are finding that lugging even a MacBookPro around is an awkward (and backbreaking) chore.

Although I’m not a programmer, I fall into the second category (see pic). 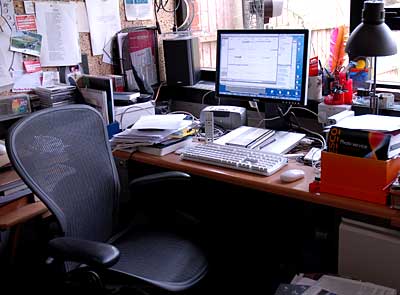 My MacBook Pro has become, effectively, a desktop machine. It’s comfortably anchored in a setup with a big screen, high-end audio and video connections, auxiliary hard drives and other clutter, such that disentangling it every morning and reconnecting it at night was becoming really tedious. So for me, the Air is really just a highly-portable, lightweight component of a wider system. They key issues then become:

1. It’s very instructive to have to think hard about which applications are absolutely necessary and which are just nice-to-have. My MacBookPro is stuffed full of the latter (a by-product of the amazing software ecosystem that has evolved around OS X). But most of them I use only occasionally — though they seem really essential when the need arises. So none of them goes on the Air.
2. My ‘desktop’ machine holds colossal amounts of audio, video and photographs. I’ve decided that there’s no need to carry music on the Air (what else is an iPod for, after all?), and it will be used only as a working store for audio recordings, photographs and video — all of which will be uploaded to the desktop when I’ve finished working on them. As a result, that 80GB drive suddenly looks big enough. (Famous last words?)
3. Syncing applications like ChronoSync and ExpanDrive have suddenly become key pieces of software. So too has VNC and the terrific Screen Sharing app built into Leopard.

So, the story so far…

The Air has been a delight to use, so far. One of the reasons I got it was that I had dinner a few weeks ago with a thoughtful senior engineer from Apple’s Cupertino HQ. Half-jokingly, I asked him if I should think about getting one. He replied by asking me to describe what I used computers for, and what my work patterns were like. Having heard me out, he said that I would find the Air a useful and productive working tool, but if I’d been a software developer he would have advised against it. Looks like he was spot on.