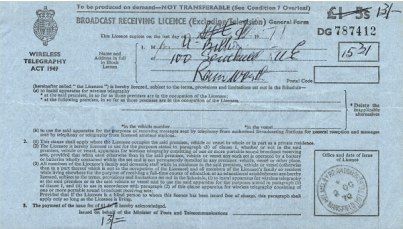 Here’s a question I hadn’t thought about before. If you live in the UK and have a TV set, then you must — by law — pay for an annual TV licence. But last night we had supper with a couple who don’t have a TV set of any kind in their house but enjoy watching programmes via the iPlayer. Are they exempt from the licence fee requirement? And, if not, how on earth would the authorities catch up with iPlayer-only viewers?

Later: My esteemed colleague, Kevin McConway, pointed me to Ashley Highfield’s blog, and thence to the FAQs on the iPlayer site, which says:

You do not need a television licence to watch television programmes on the current version of the BBC iPlayer.

You will need to be covered by a TV licence if and when the BBC provides a feature that enables you to watch ‘live’ TV programmes on any later version of BBC iPlayer, which has this option. Your TV licence for your home address will cover your use of the BBC iPlayer in your home (and outside the home if you use BBC iPlayer on a laptop or any other device which is powered solely by its own internal batteries).

You cannot currently watch ‘live’ TV programmes as part of BBC iPlayer, however, we hope to offer this function in the future.