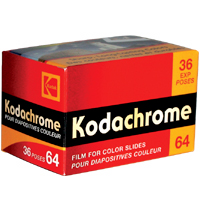 Only one commercial lab in the world, Dwayne’s Photo in Parsons, Kan., still develops Kodachrome, a once-ubiquitous brand that has freeze-framed the world in rich but authentic hues since it was introduced in the Great Depression.

Eastman Kodak Co. now makes the slide and motion-picture film in just one 35 mm format, and production runs — in which a master sheet nearly a mile long is cut up into more than 20,000 rolls — fall at least a year apart.

Kodak won’t say when the last one occurred nor hint at Kodachrome’s prospects. Kodachrome stocks now on sale have a 2009 expiration date. If the machines aren’t fired up again, the company might sell out the remaining supplies, and that would be the end.

“It’s a low-volume product; all volumes (of color film) are down,” said Kodak spokesman Chris Veronda.

Sigh. There goes part of my youth. And of Paul Simon’s.