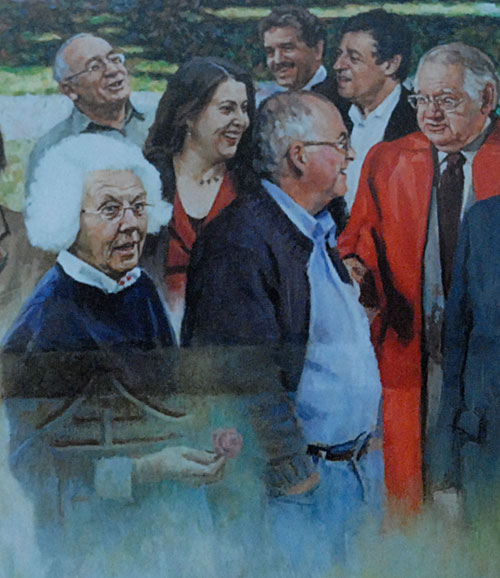 Karen Sparck Jones died on Wednesday morning. She was the widow of Roger Needham and one of the people for whom the Reader’s Digest‘s ‘Most Unforgettable People I’ve Met’ feature might have been invented. Strikingly handsome, with a magnificent head of white hair, she was also the kind of person for whom the term ‘bluestocking’ might have been coined.

She was one of the most cerebral people I ever met. She never developed any aptitude for small-talk, but would plunge straight in — as if responding to a seminar paper. She once ruined a dinner party that Sue and I gave. One of the other guests was a friend who had done a lot of work on location sensing. Karen fixed him with her gimlet eye and proceeded to interrogate him about the privacy implications of his work, apparently oblivious to the social consequences of the interrogation. She went on and on — way beyond the point where it made sense. Roger, meanwhile, blithely swirled his Burgundy and let it rip. A long marriage to Karen had inured him to the futility of interfering with a force of nature!

They made a fascinating couple. Both were fiercely intelligent — and blithely indifferent to the pressures that cause us lesser mortals to compromise. They met when they were graduate students in Cambridge, and remained here all their working lives. As students, they bought a plot of land in Coton, a nice village about two miles from the city, and built — with their own hands — a modest wooden house, in which they lived contentedly for several decades. They moved, in the end, because the noise of the M11 — which now runs close to the village — was too irritating.

I liked Karen enormously. When she was diagnosed with cancer in 2002 and spent some time in hospital, I offered to get her some books. What would she like? “You choose”, was the brusque reply. So I chose a couple of novels and had Amazon deliver them. Her reaction was astonishing — I had the impression that she had never in her life read a novel. Fiction was clearly too frivolous to be bothered with.

The last time I saw her was a few months ago. I was lunching with a friend in the ‘Shack’ — the cafeteria on the West Cambridge site where the computer scientists go to eat. Karen came in, spotted me, and said in a loud voice, “I have a bone to pick with you”. She then went to get something to eat. My friend departed hurriedly. Karen came and sat opposite me and proceeded to give me a hard time about something I had written in a newspaper column six weeks earlier. It was, of course, unnerving in one way; but it was also exhilarating to be taken seriously by such a serious intellect.

There’s a nice obit here which covers her academic career. In recent times, she was awarded the Lovelace Medal by the British Computer Society, and the Allen Newell Award and Athena Lectureship by the American Association for Computing Machinery. With her characteristic, unsentimental efficiency, knowing that she would not live to attend the ceremonies, she video-recorded an acceptance lecture last month, which I hope will eventually be available online.

She and I were Fellows of the same College — Wolfson. The photograph is a detail from the mural commissioned to celebrate its 40th anniversary. Yours truly is the untidily-dressed chap to her left!

Update… Quentin has a lovely photograph of Karen.