John Profumo, who was at the centre of one of the UK’s most famous political scandals, has died at the age of 91.

Nearly 40 years after he misled the House of Commons and helped bring down the Macmillan government, the former politician was a dedicated charity worker, for whom his friend Lord Longford “felt more admiration than all the men I’ve known in my lifetime”.

Sixty five years ago this week, in March 1940, the 25-year-old John Profumo was elected to parliament in one of those odd, not properly contested, wartime byelections, as the Conservative MP for Kettering (his only rival for the seat was a rebel Labour councillor who ran as a Workers’ and Pensioners’ Anti-war candidate).

His victory brought the young Profumo on to the Tory benches just in time for perhaps the single most important parliamentary vote of the 20th century – the “Norway debate” of May 8 1940.

Although the Norway debate was ostensibly about one theatre of the British war effort, and ironically one over which Winston Churchill (then first lord of the Admiralty) had charge, it was in practice about the credibility of the Chamberlain government to lead Britain through the worsening war crisis in Europe.

Thirty-three Tories voted against the government that day, and another 65 abstained. The result was the fall of Chamberlain and the formation of the wartime coalition under Churchill.

John Profumo was the last surviving Tory MP to have voted against Chamberlain that night long ago.

He may have helped to wreck his party in the 1960s, but in May 1940 Profumo helped to save his country. That’s worth remembering too. 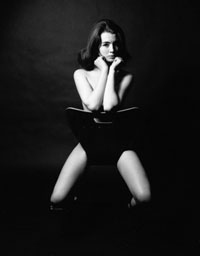 For me, though, the enduring image of the ‘Profumo affair’ is Lewis Morley’s wonderful photograph of Christine Keeler, the beautiful call-girl for whom he fell. The original is in the V&A Museum.