Today’s New York times ran [an] Apple ad … celebrating 100 million iPods sold. With that milestone achieved, I thought it might be interesting to analyze the last five years of iPod and iTunes growth.

In case anyone believes that selling 100 million iPods in five years is no big deal, here’s a bit of history. In 1945, there were 7,000 televisions in the US. By 1949, that number had grown to 1 million, and it hit 10 million just two years later in 1952. But it took more than 30 years for the number of televisions sold to exceed 100 million. Apple achieved that same 100 million mark with iPods in just five years.

Now those 100 million iPods are a big deal for Apple’s bottom line, but iTunes music has actually outstripped iPod growth. Blackfriars got involved in a little disagreement last year with an old Forrester colleague about iTunes sales. Based upon some of the data he had, he claimed that it appeared iTunes sales were slowing. I used the data I had to prove that he’d picked a particularly unfortunate sample to examine, namely the period between January and September, when fewer songs are purchased than in the big holiday season. But still, there was a lot of Web ink spilled discussing the point.

I think we can now lay that argument to rest once and for all. The folks over at Macsimum News picked up a little-noted quote from Steve Jobs saying that iTunes just passed the 2.5 billion song mark. Now for those of you keeping score at home, that means that iTunes is now selling a billion songs about every six months. But wait, there’s more! According to our figures, iPod sales passed the 100 million iPod mark in March, and TV shows passed the 50 million shows sold mark as well. Add onto that the 1.3 million feature length movies that have been sold to date, and well, I’d say you have quite a fast-growing business…

The author has made a logarithmic graph of various aspects of Apple media-related sales. (Remember that exponential growth shows up as a straight line on a log graph.) 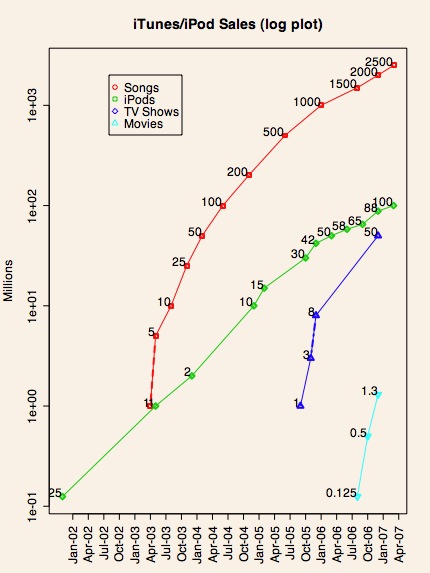 Now if you ask me, the really interesting part about this graph is the fact that iPod sales appear to be continuing their exponential climb into the stratosphere. That’s important because it drives Apple’s earnings report, which we’ll hear more about later this month. But don’t ignore those TV shows or movies at the bottom. They’re on a very steep growth curve themselves — and there are a lot of new Apple TVs that are going to need feeding with content this year.

So what does the future hold for iPods and iTunes? While music is what made the iPod and will continue to be the major driving force behind Apple’s iPod thrust, Apple is trailblazing growth in digital movies and TV shows in a way similar to what it did in music in 2002. Remember Apple’s announcement that in the first week or so of movie sales, it sold 125,000 movies? Well, today’s Boston Globe reported the first month’s sales from Wal-mart’s online movie store were a whopping 3,000 movies. If we were to graph that on the log scale graph above, we’d need to add another decade of graph below where Apple numbers are just to see the Wal-mart sales. By all public measures available so far, iTunes is well on the way to repeating its domination of digital music in digital TV and movies. After all, once you’ve bested the largest American retailer, the sky is the limit.