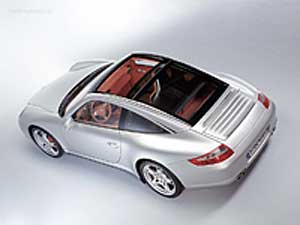 Giles Smith was lent a fancy wagon to review.

Uncool things to do in a Porsche 911, number 27: sweep confidently on to the forecourt of a busy petrol station, casually, even rakishly, aligning the rear end of the car with a vacant pump. Emerge from Porsche. Unholster pump nozzle with exaggerated air of detachment and move nonchalantly to back of car. Find no petrol cap at back of car. In company of unwieldy length of petrol hose, explore possibility that petrol cap is on other side of car. Fail to find it there, either. Begin to wonder whether car is so furiously exclusive that petrol can only be fitted at registered dealerships by qualified Porsche engineers.

But, hey, who wants to be cool, anyway? In any case, it’s a bit late for that as far as the driver of a Porsche 911 is concerned. What, after all, could be less cool than owning and driving a Porsche? Even in 2007, fairly or otherwise, the “nine-eleven” labours under the image of being the default toy of cashed-up City boys and over-motivated advertising executives. The very word “Porsche” has become a portfolio term for unpalatable behaviour in many of its guises. Or, to put it another way, the car has “wanker” written all over it – sometimes literally, if you allow it to become dirty enough.

It’s a lovely essay, written with verve and wit. Smith observes the way that

the car can produce two distinct and entirely contradictory states of mind. Call those states of mind pre- and post-911. Before driving one, you are happy to join the rest of the world in its glorious, frequently hand-signalled contempt for the brand and all who sail in it. A couple of hours at the wheel, with all that power and responsiveness at your command and with the engine burbling in your ears, and you are just about ready to sell your mother’s house from under her in order to become a card-carrying member of the community, and to hell with what anyone else thinks.

I once drove a 911, many years ago, when it was less environmentally incorrect (or at any rate when we knew nothing about global warming), and know just what he means.