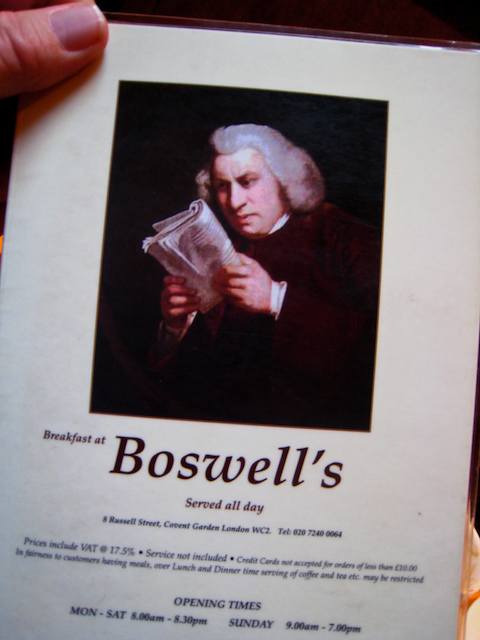 We went to a ravishing production of La Nozze di Figaro in the Royal Opera House on Saturday evening and had supper beforehand in Boswell’s at 8 Russell Street. Fans of Samuel Johnson will recognise the address. It was built in 1759-60 and owned by Thomas Davies, an actor turned bookseller and publisher and, by all accounts, a very hospitable soul. At 7pm on May 16, 1763 he was giving tea to a young reprobate named James Boswell when who should walk in but Dr. Johnson. Boswell was apprehensive about meeting the great man because he knew that he disapproved of the Scots, and so begged Davies not to mention his nationality. His host either did not hear the request, or mischeviously ignored it. Either way, the fact that Boswell was Scottish (or Scotch, as Dr. Johnson would have said) was mentioned. Boswell said defensively that he “could not help it”. “That, Sir”, boomed Johnson, “is what I find a great many of your countrymen cannot help”. (He also famously observed that “The fairest prospect for a Scotchman is the high road to England”.)

Not an auspicious beginning, you’ll admit; but still it led to one of the greatest collaborations in English literature.