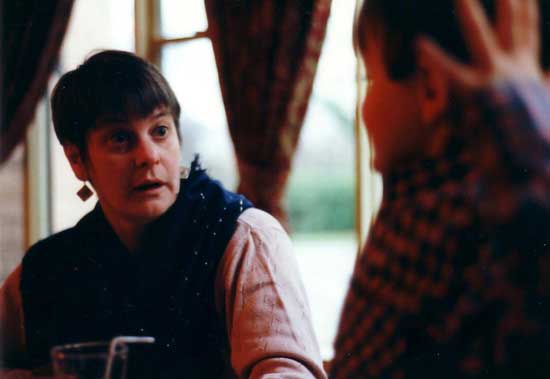 It’s four years today since my lovely Sue died. This is one of my favourite photographs of her. She’s feigning astonishment at one of Tom’s tall stories, narrated with the all the wonderful exuberance of a four year old. It was taken in a restaurant after a happy Sunday morning spent browsing through the market at Camden Lock in London, until I had put my foot down and loudly demanded lunch.

A few weeks ago, sitting on a beach in Donegal while the kids fooled about in the waves, I fell into conversation with a woman who was also watching her children, similarly engaged. “So”, she said, after a time, “you have sole custody of the children?” — and was mortified when I explained that their mother had died. The poor woman felt that she had committed an unforgivable gaffe and it took a while to reassure her that it was ok.

Brooding on the exchange afterwards, it occurred to me that, in a way, she had hit the nail on the head. The thing that most agonised Sue about dying was that she was leaving her children. She felt that she was failing them, letting them down, abandoning them. The only way I could comfort her was by promising her that, for as long as they needed me, nothing would come between me and them.

It was the most solemn promise I’ve ever made and, as I unearthed the towels that they had forgotten (and I had remembered) to pack for the beach, I persuaded myself that I’m doing my best to honour it. But I also started thinking about the etymology of ‘custody’. In law, it has negative (“detention: a state of being confined”) as well as positive connotations. I like the US legal system’s definition: “the right to or responsibility for a child’s care and control, carrying with it the duty of providing food, shelter, medical care, education and discipline”. In that sense, the woman on the beach was right. I’m not sure about the discipline, but I can tick all the other boxes on that list.

One unambiguously positive thing about the last four years is that the children have always been able to talk openly about their mother — something I attribute in part to the fact that they explicitly gave her their permission to die. In the car on the way back from visiting their grandparents last Sunday, they told me about how they make decisions as to whether to explain to new friends why they have only one parent. It transpires that they operate a “need to know” principle; only good friends need to know; everyone else is left to infer that, somehow, their dad made a mess of his marriage!

In his thoughtful little book, A Grief Observed, C.S. Lewis says somewhere that you never stop being married to a spouse who has died. What I’ve learned from the last four years is that he was right.