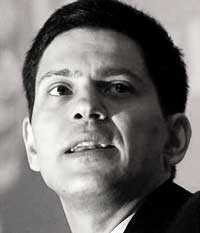 I was idly browsing and came on this picture of David Miliband and wondered if he was the youngest Foreign Secretary ever. He has amazing hair — like astroturf that’s been sprayed jet black. Will it go grey as the strains of office multiply?

And then I came on this passage in Janet Flanner’s New Yorker dispatch from Paris for June 23, 1948:

The most worried, wearied, unthanked, and necessary public servant in any government today is its Minister for Foreign Affairs. He is like a mother-in-law — in the bosom of the family, yet not of it. Essentially, he is related to a world outside, a go-between harried by what the family thinks is its due and by what the neighbours say it deserves, which is invariably a lot less.

She was writing about Georges Bidault, the French Foreign Minister of the time, but her observation is generalisable. For example: As Prime Minister, Margaret Thatcher was pathologically suspicious of the Foreign Office. Just as the Ministry of Agriculture was effectively the ministry for farmers, she reasoned, so the Foreign Office was the ministry for foreigners, and so she installed her own policy advisers in Number 10 and ran an independent foreign policy from there. Gordon Brown is also a control freak, so perhaps it is legitimate to worry about young Miliband’s hair.