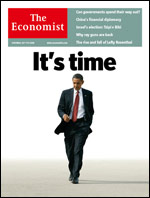 The Economist has made up its mind. I’d forgotten how it ‘voted’ in 2004 and went to check in the archive. Turns out that the magazine had anticipated the question and provided a page on previous endorsements.

Here’s how they went:

The only thing that’s slightly weird is the standfirst on this year’s endorsement. “America should take a chance and make Barack Obama the next leader of the free world.” Er, does that mean that electing a 72 year-old unstable ignoramus with a VP who couldn’t locate most countries on a map would be a safe bet?

I love the Economist. Its journalism is terrific. But its editorial line is often potty.