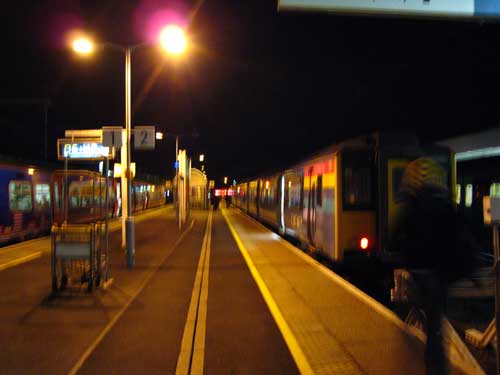 Up at 5.45am. I have a breakfast meeting in London: good for those who live there, not so good for the rest of us. House dark and a bit chilly: central heating hasn’t kicked in yet. Children sleeping. Greeted by yawning cats, surprised that any human is sentient at this time of day. Pack laptop and 3G modem and start car. Journey to station takes ten minutes — later in the morning it will take 50. Astonishing spectacle at station car park — vacant spaces. Park car and wait for idiotic meter to dispense ticket while making loud buzzing noises after swallowing coins to the value of the Gross National Product of Ecuador. Join throng of furtive, hurrying figures, coat-collars turned up against the biting East Anglian wind. I have entered, albeit temporarily, the world of The Commuter.

Day return to London costs £29. We’re flying to Derry at half term and tickets for all the family have cost less. Buy papers and board train, which is populated mainly by ashen-faced folks clutching cardboard cups of Costa coffee and newspapers. One or two have paperback books. One person opens a laptop (a Dell) and starts work on a document. After a time I notice that he is stabbing angrily at his keyboard and recognise the characteristic symptoms of system crash. That’s right — he’s a Windows user. Nothing I can do for him. Blue screen of death. Leave him to his fate. I’m sure he saved the document. Or not.

We speed through darkened countryside, stopping at small stations to pick up commuters. Affluent ones get on at Audley End, in leafy Essex countryside. Mostly work in the City, I’d say. Better suits anyway.

Dawn breaks, revealing a lowering, grey sky. We pass through towns and settlements, seeing only untidy back gardens and the rear ends of industrial estates. Interesting that we turn our backs on the railway and present our best face to the road. So a rail trip always reveals the dark underbelly of urbanisation.

With each stop, the train fills. There’s a seat for everyone — just. Past the urban waste that is Tottenham Hale and slipping into the City, heading for Liverpool Street station where, the driver announces over the public-address system, “this train will terminate”. “No, you silly bugger”, I reply under my breath, “the service terminates, not the train”. Pedantic, you see. Comes from being an academic. 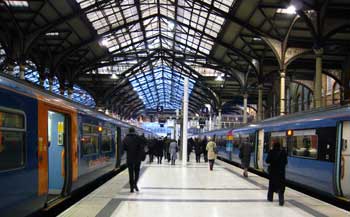 Onto the platform and join the lemmings heading into the City, where they will sit at multi-screen desks and buy and sell sub-prime mortgages wrapped up in pink tape and made to look like assets. Outside the station there’s a line of Mercedes and Lexuses and Audi A8s with smoked glass, waiting to whisk corporate bosses to their places of work. I walk through the throng to my meeting remembering the advice of a former colleague (a lawyer who turned down a lucrative City career to become an academic). “Making money is easy”, he used to say, “provided you are prepared to work with the stuff”. These people have made that choice. For years they’ve lived high off the hog, earning the colossal bonuses which have had such a distorting impact on our economy (as John Lanchester dryly observed recently). 2007/08 will be a lean year for some of them; there are forecasts of 20,000 redundancies looming in the Square Mile. Last in, first out. Easy come, easy go. Not my problem. Now where is that bloody venue?