Not many today, I presume, read the works of Francesco Stabili, better known as Cecco d’Ascoli. What have survived of his writings are the incomplete epic the Acerba, two astrological treatises and a handful of sonnets, though here ascription and provenance are uncdrtain. On linguistic grounds alone, these vestiges are all but inaccessible to the common reader. Scholars interested in Cecco must study him either in problematical codices or flawed editions. None the less, d’Ascoli’s demanding, often rebarbative works have exercised their spell.

Hmmm… I know what you’re thinking. You detect the distinctive tones of de Selby, the great philosophical magus invented by Flann O’Brien. It has the same air of lofty erudition, of sublime indifference to the ignorance of the masses, of ready access to a thesaurus. And yet it is not the work of De Selby but of this man: 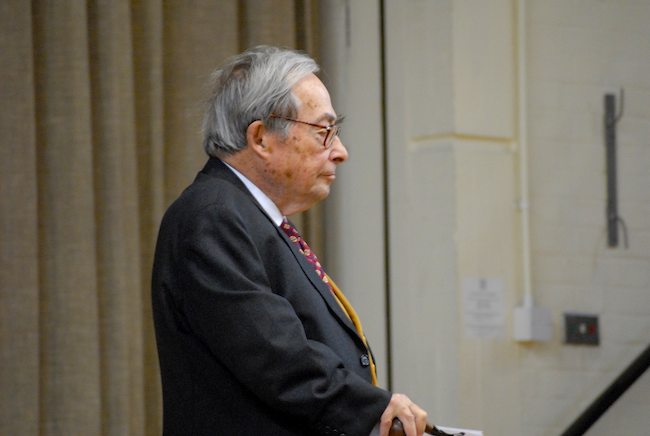 Dr George Steiner of Geneva (and Cambridge), Whom God Preserve, and whose latest book is entitled (if you please), My Unwritten Books (of which there are seven). I’m only on to Book Two at the moment, and so far I haven’t understood a word of it, but his first ‘unwritten’ book — on Joseph Needham, the great Cambridge historian of Chinese science and technology — would actually have been a good read. In fact, Steiner is jolly interesting on the subject of Needham, whose biography he once contemplated writing. One of his other ‘books’ is intriguingly entitled The Tongues of Eros, so perhaps I will give up on old Cecco and move on to that.

Last Thursday, George gave a lecture in Cambridge marking the centenary of the birth of Jacob Bronowski, another polymath who, in the lecturer’s opinion, went churlishly unhonoured by the British Establishment. George, who has felt the chilly disinterest of said Establishment in his own case, spoke feelingly on the matter — though one couldn’t help remembering that he has been granted the ultimate accolade: an appearance on Desert Island Discs.

The lecture was entitled “The Two Voices” and he ended by quoting from Tennyson’s poem of that title:

‘I cannot hide that some have striven,
Achieving calm, to whom was given
The joy that mixes man with Heaven:

‘Who, rowing hard against the stream,
Saw distant gates of Eden gleam,
And did not dream it was a dream;

‘But heard, by secret transport led,
Ev’n in the charnels of the dead,
The murmur of the fountain-head–

‘Which did accomplish their desire,
Bore and forebore, and did not tire,
Like Stephen, an unquenched fire.

‘He heeded not reviling tones,
Nor sold his heart to idle moans,
Tho’ cursed and scorn’d, and bruised with stones:

‘But looking upward, full of grace,
He pray’d, and from a happy place
God’s glory smote him on the face.’