Come back, Mary Poppins — your country needs you!

In the UK we have our own little conflict-of-interest circus over the business of a visa for the ex-lover of the Home Secretary.

But over on the other side of the pond, a more encouraging little scandal has emerged, blinking into the light. Dubya had nominated Bernard B. Kerik, a macho creep straight from central casting (shaven head, big ego, bristling moustache, black belt in karate — see picture, and note Stars and Stripes drooping sadly in background), to be the next Secretary of Homeland Security. 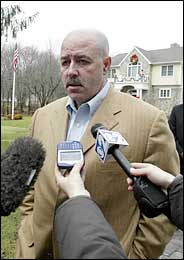 After a textbook start (high school dropout, fathering an illegitimate daughter in Korea, whom he refused to acknowledge and support, serving as bodyguard for Saudi royals and then becoming a New York narcotics cop) he got his big break in 1993 when New York Mayor, ‘Sir’ Rudolf Giuliani, appointed him as his chauffeur and bodyguard. Thereafter, as Sidney Blumenthal chronicled in a nice little potted bio last week, Kerik went from strength to strength.

“Giuliani made Kerik deputy police commissioner and chief of the corrections department. One million dollars in taxpayers’ money used to buy tobacco for inmates disappeared into a private foundation run by Kerik without any accounting. In 2000, Giuliani leapfrogged Kerik over many more qualified candidates to appoint him police commissioner.

Kerik spent much of his time after 9/11 writing a self-promoting autobiography, The Lost Son. The city’s conflict of interest board eventually fined him $2,500 for using three policemen to conduct his research.

Dispatched to Iraq to whip security forces into shape, Kerik dubbed himself the ‘interim interior minister of Iraq.’ British police advisers called him the ‘Baghdad terminator’, and reported that his reckless bullying was alienating Iraqis. ‘I will be there at least six months,’ he said. He left after three.”

Just the kinda regular guy, in other words, who Dubya would want to tend to the security of the United States. But this grand plan has come unstuck. Why? Nanny trouble. Let the New York Times tell the story:

“On Friday, Mr. Kerik informed the administration that, contrary to assurances he had given the White House counsel’s office before the president nominated him on Dec. 3, a nanny he had employed appeared to have been in the country illegally and that he had failed to pay taxes on her behalf. He told President Bush in a brief phone call about 8:30 p.m. Friday of his decision to withdraw, said a White House official.

White House officials were clearly annoyed at Mr. Kerik for not determining the nanny’s immigration status before this week but said they had no evidence he had sought to mislead them. ‘It was Kerik’s screw-up, it was that simple,’ the official said. ‘But it’s a mistake you can’t tolerate with someone who has oversight for immigration.'”

In the old days, mistresses were the cause of chaps’ downfalls. Now it’s nannies. Mary Poppins, where are you when you’re needed?