Isla sent me a link to Read The Words. Hence this. Lihua pointed out that Odiogo does the same thing.

Web 2.0 is a buzzword introduced in 2003–04 which is commonly used to encompass various novel phenomena on the World Wide Web. Although largely a marketing term, some of the key attributes associated with Web 2.0 include the growth of social networks, bi–directional communication, various ‘glue’ technologies, and significant diversity in content types. We are not aware of a technical comparison between Web 1.0 and 2.0. While most of Web 2.0 runs on the same substrate as 1.0, there are some key differences. We capture those differences and their implications for technical work in this paper. Our goal is to identify the primary differences leading to the properties of interest in 2.0 to be characterized. We identify novel challenges due to the different structures of Web 2.0 sites, richer methods of user interaction, new technologies, and fundamentally different philosophy. Although a significant amount of past work can be reapplied, some critical thinking is needed for the networking community to analyze the challenges of this new and rapidly evolving environment.

Photo sharing site Flickr is one of the leading lights of Yahoo – but cofounders (and husband/wife team) Caterina Fake and Stewart Butterfield won’t be around to keep driving the product forward. They are both joining the mass exodus of executives from the company.

From what we hear, neither has imminent plans to work on any new projects, but I suspect we haven’t heard the last from either of them.

Butterfield and Fake created Flickr in 2004. It began as a photo-sharing feature of a gaming project, has since blossomed into one of the premier photo sharing sites on the web. Yahoo purchased Flickr for $35 million in March of 2005. In June 2007 Yahoo shutdown Yahoo Photos, making Flickr their exclusive photo sharing website. Today Flickr hosts over 2 billion images.

Wonder what they will do next?

The mean size of a web page has more than trebled since 2003 from 97.3KB to more than 312KB, according to a review of available research by WebsiteOptimization.com.

The mean number of objects per page has meanwhile near-doubled from 25.7 to 49.9. The authors blame external objects for the majority of delays experienced by web browsers.

The last calendar year saw sites really pack on the data poundage with widgets, gadgets, web crapps, embedded video and other mashtastic tinsel. The average page swelled by more than 60KB to 312KB by the end of December. Projections put next new year’s weigh-in at 385KB.

While broadband connections have more than kept pace with the rapidly fattening web, those stuck using dial-up are increasingly marginalised, unable to view many sites unless they plan a weekend around it.

What with Amazon S3 and now Google’s App Engine readily available? The Google service is currently free (premium accounts coming later) but even a free account can use up to 500MB of persistent storage and enough CPU and bandwidth for about 5 million page views a month. 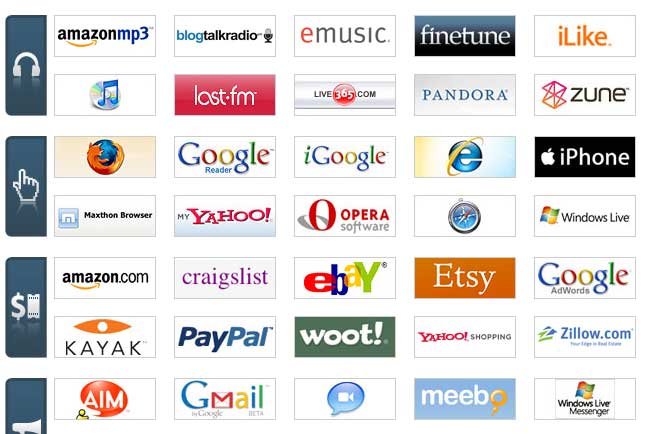 Adobe has launched an online version of PhotoShop Elements. Only available to those with US ISPs at present, though.

Tom Coates is annoyed with Nick Carr. Here’s his summing up:

I think the thing that annoys me most about your piece here is that it’s the same rhetoric that you always take – that there’s something inherently suspicious about all this weird utopian rhetoric of these mad futurist, self-important technologists – that somehow none of it really applies to the rest of the world, because those people are so detached from reality, and that finally they’re all missing what’s really important.

All of which would be rather more convincing if you weren’t recapitulating what we’ve been saying for the last three years.

While I’m sure it helps promote you in the eyes of people with power and money to be suspicious and critical of new technology and set yourself up to be an impartial arbiter of what’s happening, free of hype and applying real-world values (or however it is you sell this warmed over stuff), I’d argue that you’re ultimately doing yourself a disservice. You just look ill-informed!

Ouch! That’s a bit harsh: Nick Carr is a bit of a contrarian, but sometimes he’s very perceptive (e.g. about the sharecropping metaphor as a way of thinking about MySpace and some user-generated content). But Tom Coates is right about the chunk of the intellectual spectrum to which Carr has staked a claim. The title of his first book — Does IT Matter? — says it all. He’s positioned himself as the ‘grown-up’ commentator.

An essential link for every budding Web 2.0 entrepreneur — a TechBubble-friendly Company Name Generator. I’ve already got ‘Blogblab’ out of it. And — yep you guessed it! — it’s taken. Sigh.