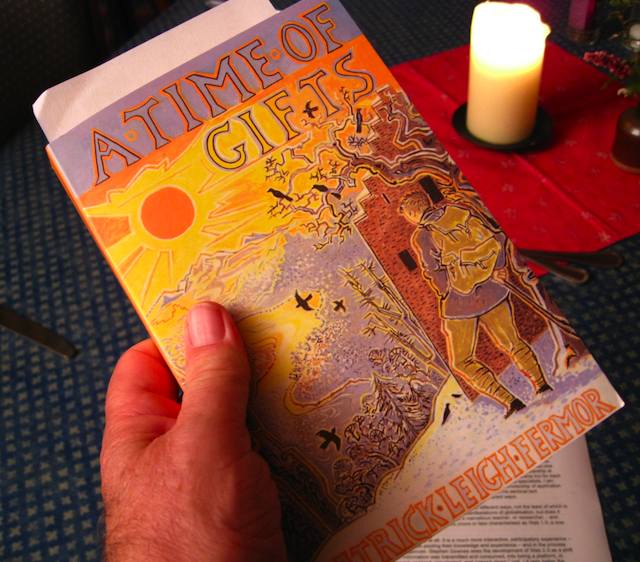 At the age of 18, Patrick Leigh Fermor set out to walk from Rotterdam to Istanbul, equipped only with a stick, a rucksack, a notebook and a gift for languages. This is the first of the two retrospective volumes in which he recounted his adventures. It’s a ravishing book, which has made me revisit my own memories of various places on the Continent where he passed through in the 1930s. I lived and worked in Holland for a year in the 1970s, for example, and have loved the country ever since, so his summary resonated with me:

“I was astonished … at the impressive, clear beauty of the country and its variety, the amazing light and the sway of its healing and collusive charm. No wonder it had produced so many painters! And the Dutch themselves? Although we were reciprocally tongue-tied, the contact was not as light as these pages must suggest. On foot, unlike other forms of travel, it is impossible to be out of touch; and our exchanges were enough, during this brief journey, to leave a deposit of liking and admiration which has lasted ever since.”

He’s very perceptive about the Dutch landscape and its eerie, consoling familiarity — the product of centuries of painterly mastery. I lived in the East of the country, near the German border, but often drove to Amsterdam by myself on Saturday afternoons, and I remember vividly how oddly familiar the landscape seemed as I neared the coast, especially in the winter.

“If there is a foreign landscape familiar to English eyes by proxy, it is this one; by the time they see the original, a hundred morning and afternoons in museums and picture galleries and country houses have done their work. These confrontations and recognition-scenes filled the journey with excitement and delight. The nature of the landscape itself, the colour, the light, the openness, the expanse and the detail of the towns and the villages are leagued together in the weaving of a miraculously consoling and healing spell. Melancholy is exorcised, chaos chased away and wellbeing, alacrity of spirit and a thoughtful calm take their place.”

I’ve always thought that if I were deported from the UK as an undesirable alien, Holland is where I would settle.