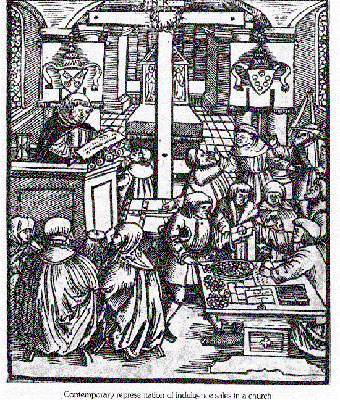 The Reformation was sparked by Martin Luther’s revolt against the corrupt sale of ‘indulgences’ by the Catholic church. (An indulgence was the remission by the pope of the punishment in purgatory that was due for sins even after absolution.) The basic idea was that affluent sinners could purchase remission from the church’s salesforce. (See illustration, which shows the business in action.) It was a great racket because, of course, the punters would never know whether the goods were valid or not.

Spool forward a few centuries and we have a new form of indulgence — carbon offsets. Basically, these allow affluent air-travellers to ease their consciences by making contributions to companies which claim to run projects for offsetting carbon dioxide emissions (like planting trees in tropical countries). Since the beneficial effect — if any (there is some controversy about that) — will materialise long after the offsetter has passed away, the offset business looks like a hustler’s dream. Now the Blair government is so concerned about the matter (possibly because Blair recently discovered the political necessity of offsetting his family’s holiday flights) that it proposes to establish a ‘Gold Standard’ for offset schemes.

Just think: if medieval popes had come up with the same wheeze they would have shot Luther’s fox and the Reformation might have fizzled out.

Later: This nonsense may be contagious. It’s being reported that one of Dave Cameron’s policy groups is talking about tradeable fat permits as a way of combatting obesity.