If you want to know why VW is in trouble, look no further! 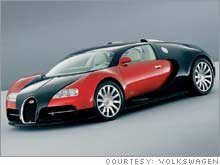 Each Bugatti Veyron 16.4 will cost an estimated $1.24 million, according to media reports. For that, buyers will get an all-wheel-drive two-seat sports car with a lightweight carbon-fiber body and 16-cylinder engine capable of producing 1,001 horsepower.

Oh, and according to Automotive News, this hideous vehicle still suffered from two major problems: The enormous engine tended to overheat and the car, capable of a top speed of well in excess of 200 miles per hour, was unstable at high speeds. Wouldn’t it be nice if Jeremy Clarkson bought one and then totalled it — and himself — thereby ridding the world of two excrescences in one fell swoop.