Randall Stross has a perceptive NYT piece about the difference between Apple’s retail stores and Sony’s:

Last Sunday, I set out to have a look for myself. I began at Sony’s flagship in San Francisco, at the Metreon Center, the shopping and entertainment complex. The mall was crowded, but Sony’s store, measuring an enormous 20,000 square feet, was all but deserted. The two uniformed members of the store security staff matched the number of customers I could see browsing the store’s wares.

Then I headed for the Stanford Shopping Center in Palo Alto, where I could see a Sony Style store compete almost directly across from an Apple retail store. The weather was gorgeous, drawing the usual weekend throng to the shopping center.

Sony’s mall store was long and large — 6,000 square feet — and filled with curvy panels and chirpy taglines like “My Style” on the walls and plush theater nooks. Here, too, the sales staff seemed to outnumber customers.

A group of five young salesmen and saleswomen who stood near the door when I entered were so engaged in a private, and apparently amusing, discussion that my imploring presence failed to draw anyone’s attention. The only other customers in the store were at the far other end, near the PlayStations. I suppose that the employees near me had become accustomed to busying themselves with their own entertainments.

A few yards away was the Apple store, which is one of Apple’s newer “mini” stores, introduced in 2004 and only about an eighth the size of Sony’s Stanford store. It was simplicity itself: a rectangular space with products lining the two sides, laptops placed on a small table, open space taking up most of the room, and, of course, the Genius Bar. The store was packed, yet the sales people were alert and attentive… 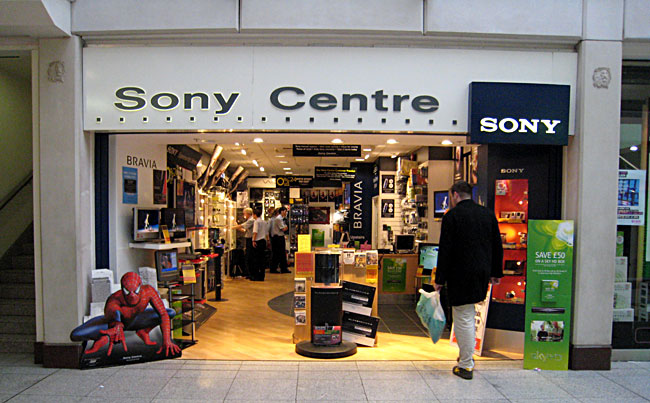 He’s right. There’s a Sony store in Cambridge (see above) and it generally seems pretty deserted. The photograph shows four staff and no customers. In contrast, I’ve never seen an Apple store that wasn’t packed. Among other things, there’s the fact that Apple provides what amounts to a free Internet cafe.

It’s strange to see the way the two companies have switched roles. Sony dominated the market for chic gadgets for decades (the Walkman, remember, was the iPod of its day). Now Sony has become, somehow, pathetic.